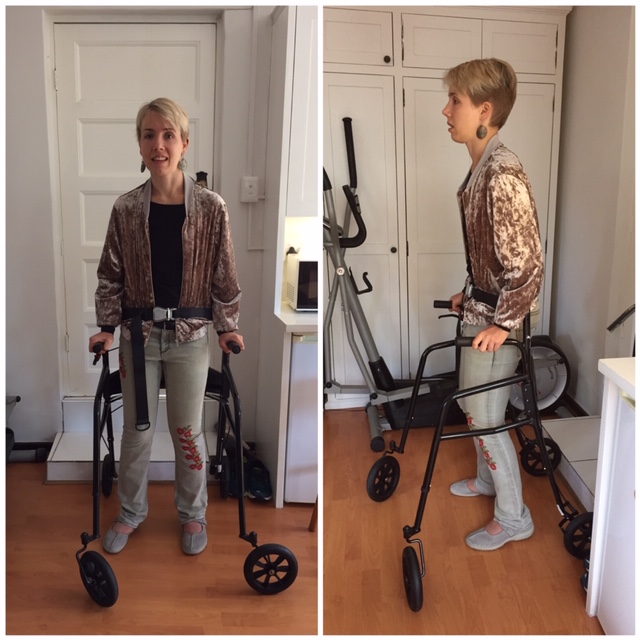 One evening in March this year, I was lying in bed, scrolling through Facebook when I came across a video ad for a walker called the Lifeglider.

I normally ignore most video ads, but for some reason this one grabbed my attention.

I think this happened for two reasons:

1) the name Lifeglider is hell of appealing to someone like me who on a “I’m feeling sorry for myself day”, would describe her mobility as Life-effort (I mean who wouldn’t want to glide through life?) – and;

2) the first image in the video was of a man doing a sort of superman dive whilst being held up in the walker by a safety belt around his waist – this was advertising the fact that you can’t fall to the ground whilst using it.

I thought that was pretty cool and again extremely appealing to a person (me again) who spends a lot of time anticipating falling.

Before anyone feels too sorry for me about the falling issue, I’d like to state that I am quite a expert and have developed techniques (learning to laugh at myself has also helped) that often result in me not hurting myself.

But lets get back to the Lifeglider.

After some research and logistical planning, I ordered and paid for my Lifeglider – they are only made and sold in America. Given the rand to dollar exchange, I ended up paying for what I call the Porsche of walkers!

In the past I have always named my walkers (I have Bob and Lwazi) so I decided my Lifeglider should be named as well. I settled on the name Charlie because my dad (although he doesn’t really know why) often calls me Charlie and I’ve grown to like the name.

The day Charlie arrived, I excitedly buckled myself into him. It felt great to be standing straight and tall again, after years of being bent forward thanks to my other walkers. I felt ready to get my glide on (walk forward) but as hard as I tried, I could barely move Charlie forward. I managed to stay positive and upbeat after that initial try with Charlie but a few hours later, I did have a bit of a meltdown. This was because when I had ordered Charlie, there was a big part of me that had hoped that he’d be answer to all my problems (i.e. I’d be moving like a champion with him right from the start).

So you can imagine the disappointment I felt as well as the frustration at the exhausting thought of yet another challenge.

I am never quite sure how I pull myself together after these meltdowns, but I did and enlisted the help of my Biokinetist and my Orthotist.

We realised I needed to rewire the neural pathways (related to walking) in my brain. It’s been roughly 6 years since I got my first walker (Bob) and in that time, I’ve developed a large array of compensatory mechanisms and certain walking patterns. These are not very helpful if I’m going to use Charlie and therefore need to go (hence the need for the rewiring).

As tired as I got at the thought of yet of another challenge, my DNA make up makes it impossible to give up. So armed with great support, I’m doing daily battle with my neural pathways. Yes my progress is frustratingly slow but it’s there.

Charlie WILL EVENTUALLY be the answer to a lot of my problems.